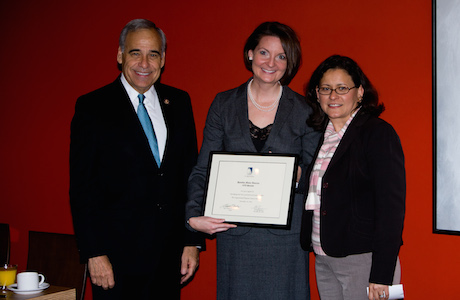 Hyundai’s partnership with the Congressional Hispanic Caucus Institute in 2014 included the announcement of Hyundai’s Title sponsorship of the CHCI Virtual Leadership Institute.  The goal of this new program is to provide virtual leadership training to 1 million students over the next 10 years.

Hyundai continues to be a Champion Sponsor and member of the CHCI 1978 Society.  In addition, through the comprehensive Hyundai sponsorship, CHCI will continue to document their Congressional Interns’ experience through the CHCI Intern Diaries.  Lastly, congratulations to Zafar Brooks, Director General Affairs, Corporate Social Responsibility, and Diversity Inclusion for Hyundai, who was appointed to the CHCI Corporate Advisory Council.

The 2014 BET College Tour returned to take over the campuses of Historically Black Colleges & Universities (HBCUs) for a day filled with student contests, artist performances, and the opportunity to engage first-hand with sponsor activations.

Hyundai joined the ranks of the tour as a National Sponsor, utilizing the BET College Tour to showcase new vehicles on-site, conduct market research, distribute branded premiums at each stop and drive conversation around the brand activation via social media.

As the presenting sponsor of the Freestyle Rap Tournament, Hyundai received high visibility on the College Tour performance stage. At each stop, eight (8) students rapped against each other in a 30-minute tournament taking place in front of a Hyundai branded banner. The winner of each round was determined by crowd applause, and would advance further in the tournament. Each school’s grand prize winner was presented with Beats by Dre headphones by a Hyundai representative on-site. 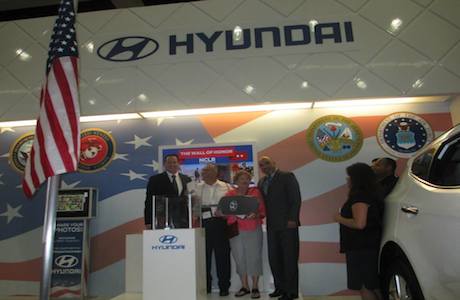 Hyundai Motor America continued its partnership with NCLR as a Gold Level Sponsor of the 2014 NCLR Conference, title sponsor of the Community Pavilion in the Latino Expo, and Co-Chair Sponsor of the Monday Night Concert which featured Latin Grammy award winner Gilberto Santa Rosa and singing sensation Shaila Durcal.

More importantly, Hyundai culminated the Our Latino Military Heroes campaign which recognizes the accomplishments and celebrates the achievements of our US Military service members.  A promotional program was conducted where the grand prize winner was announced at the Latino Expo.  Congratulations to Jesus Y. Rodriguez who was the grand prize winner of a new 2015 Santa Fe Sport SUV! 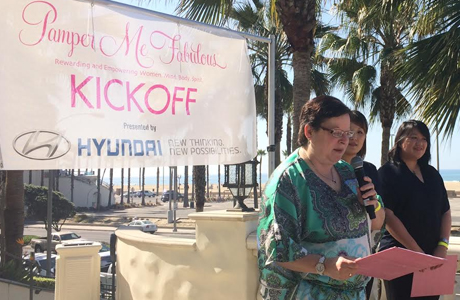 In celebration of Women’s History Month this year, Hyundai Motor America once again was the Presenting Sponsor of Pamper Me Fabulous. Held this year at the Hyatt Regency Resort and Spa in Huntington Beach, CA, Pamper Me Fabulous is an experiential event produced by women, for women.

The event provides a setting where women can spend quality time with friends while engaging in a variety of activities that are important to and provided by women. These activities include guest speakers, financial/family discussions, health and fitness instruction, and recreational activities.
Our event activation theme focused on creating an experience where women could use social media to share a message of empowerment and inspiration with other women, friends, and family. 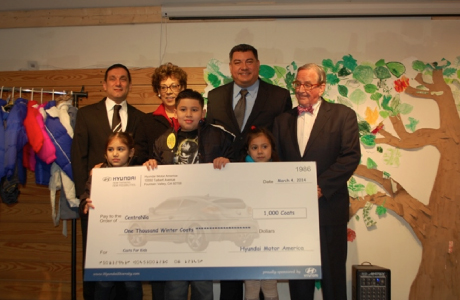 The Coats for Kids Initiative was expanded this year to Washington DC. Hyundai partnered with Washington DC based CentroNia, a nationally recognized, multicultural learning community organization with a pioneering approach to bilingual education.Their dynamic curriculum thrives to engage the whole family by providing guidance in each step of the way for children, youth and parents to achieve their goals. The CentroNia programs include Early Childhood Education, DC Bilingual Public Charter School, Food and Nutrition, Afterschool Learning, and the CentroNía Institute.

On March 5, 2014, a donation ceremony was held at CentroNia’s Bilingual Charter School in Washington DC where Hyundai donated 1,000 winter coats. In addition, Hyundai provided CentroNia a grant in the amount of $5,000 to support their award winning Food and Nutrition Program. 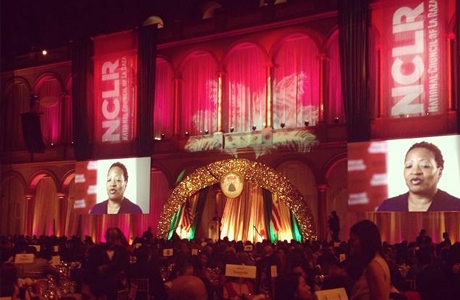 Hyundai continues its partnership with NCLR in 2014 as the Co-Chair Sponsor of the 27th Annual NCLR Capital Awards. Each year, the NCLR Capital Awards brings together Hispanic leaders, community activists, elected and appointed officials, leaders from nonprofit organizations, and executives from Fortune 500 companies to recognize congressional leaders for their support of public policies that are vital and important to the Latino community.In addition, NCLR also honors those outside of Congress who are tireless advocates for Hispanic Americans with the Public Service Awards.

During this year’s Capital Awards, Hyundai announced a partnership with NCLR to launch the Nuestro Heroes Militares Latinos (Our Latino Military Heroes) social media campaign to recognize the many brave Latinos who are serving or have served in the US Armed Forces.
Check back in May 2014 for more information on how you can honor your Latino Military Hero! 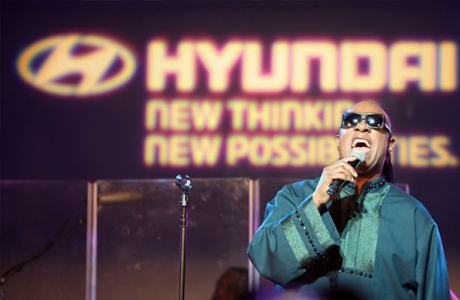 For the fifth consecutive year, Hyundai was a Premiere Sponsor of the NAACP Image Awards. The NAACP Image Awards is the nation’s premier multi-cultural awards show celebrating the outstanding achievement and performances of people of color in the arts (television, recording, literature, motion picture and writing & directing), as well as those individuals or groups who promote social justice through their creative endeavors.

In celebration of Black History Month, we acknowledge and honor the achievements of this year’s 45th Annual NAACP Image Awards nominees and winners. We applaud them for their contributions in the areas of art, culture, entertainment and community as they create positive images and achieve new milestones that continue to move the African American community forward. Like those who came before and for those who still dream, we can each Make History Now. 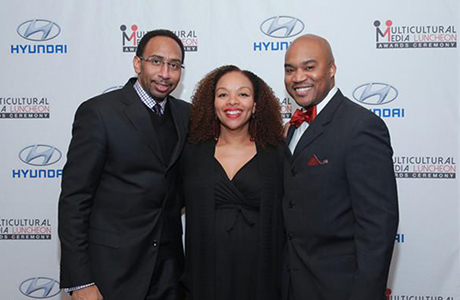 The Multicultural Media Luncheon is an annual awards event hosted by The Ajamu Group and held during the North American International Auto Show to recognize the achievements of companies and individuals that have a positive impact on diversity through media. For the second consecutive year, Hyundai Motor America was the Presenting Sponsor of the event.

This year, the keynote speaker was Stephen A. Smith, Host of First Take and NBA Analyst for ESPN.  Hyundai Motor America was recognized as a nominee for the best multicultural commercial of the year for the 2013 Super Bowl ad “Team.” Zafar Brooks, Director Corporate Social Responsibility and Diversity Inclusion provided welcome remarks and participated in a radio interview on Table Talk with Brenda Perryman to discuss this year’s event. You can view the interview here:http://www.youtube.com/watch?v=oA-U1Kn-INc&feature=share&list=UUFcmpKYhYEc21XM5pEEjJfA&index=1 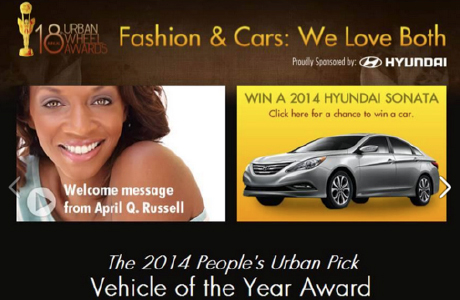 For this year’s event, Hyundai sponsored a social media campaign to select the Urban Wheel People’s Pick.  Through a Facebook application, participants were able vote for their favorite urban vehicle of the year. With over 15,000 Facebook Likes and 12,000 votes cast, this year’s winner of the Urban Wheel People’s Pick for Vehicle of the Year was the 2014 Hyundai Santa Fe.

In addition, all those who cast a vote for the Urban Wheel People’s Pick were entered into a sweepstakes to win a new Hyundai vehicle.  Congratulations to Ms. Dorlisa Dvorack, the winner of the 2014 Hyundai Sonata!!

January 2014 marked a major milestone for the Hyundai Coats for Kids Initiative and our partnership with Focus: HOPE. Since 2010, Hyundai has donated 5,000 winter coats and $50,000 to Focus: HOPE in support of the HOPE Village Initiative and the Eleanor Josaitis Fund.The Hope Village Initiative aims to make Detroit a desirable place to live, work and raise a family and is committed to supporting academic achievement of children living in the neighborhoods around the Focus: HOPE campus in Detroit, MI.

Through the Hyundai Coats for Kids initiative, Hyundai aims to provide children and their families with the practical necessity of a warm coat to help increase school attendance during cold winter days.